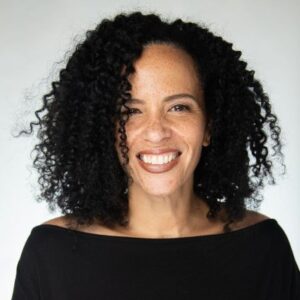 The CSN is pleased to announce ​Associate Professor Raychelle Burks as its first-ever Scholar-in-Residence for summer 2020. Dr. Burks will focus her work on the Center’s outreach and science communication efforts, including working with the summer undergraduate research program on a social media campaign.​ In addition, Dr. Burks will share her analytical chemistry expertise and participate in the center’s summer tutorial program. She will also present a free public webinar on chemistry in pop culture on August 4 at 7:30 p.m. Central (register here).

Dr. Burks is joining the faculty of American University in Washington, D.C. as an Associate Professor of Analytical Chemistry on August 1. Previously she served as Assistant Professor of Chemistry at St. Edward’s University in Austin, Texas, and postdoctoral research associate and visiting assistant professor at Doane University. Her research focuses on design, fabrication, and analysis of colorimetric and luminescent sensors that are field portable.

Dr. Burks (also known as @DrRubidium on Twitter) is renowned for her work in science communication and her advocacy in promoting women and underrepresented groups in the sciences. Among her many honors, Dr. Burks has been awarded the American Chemical Society’s (ACS) 2020 Grady-Stack Award for Interpreting Chemistry for the Public, and is an American Association for the Advancement of Science (AAAS) IF/THEN® Ambassador. The Grady-Stack award recognizes individuals who have increased public knowledge and understanding of the chemical sciences through television, film, books, lectures, and other media, and includes prior winners such as Alan Alda and Deborah Blum. Her multi-media appearances include the upcoming Smithsonian Channel show The Curious Life and Death Of…, Science Channel’s Outrageous Acts of Science, and ACS’s Reactions video programs as well as several popular podcasts. ​She writes a chemistry-meets-crime column called “Trace Analysis” for Chemistry World and her writing has been featured in Slate and The Washington Post, among others.

Dr. Burks’s free public webinar on chemistry in pop culture will be hosted by the CSN on Tuesday, August 4 at 7:30 p.m. Central via Zoom (register here). Welcome to the CSN, Dr. Burks!